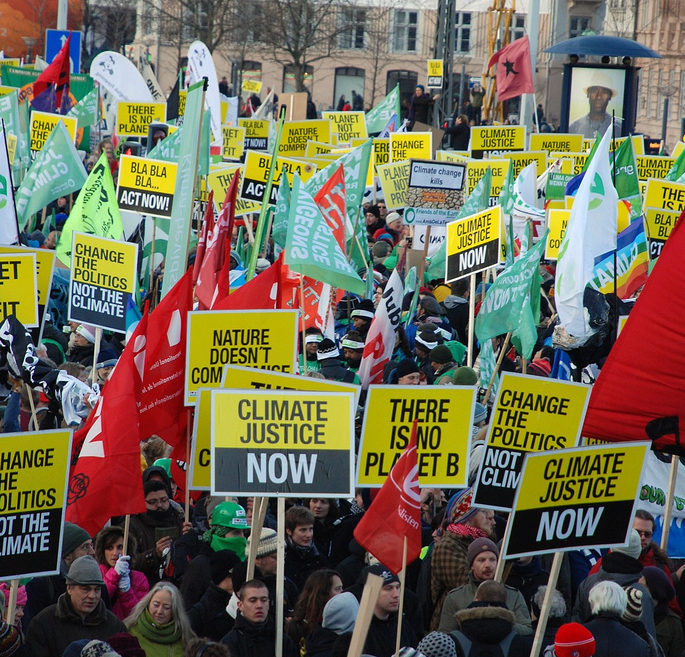 Regular readers may recall our fondness for the philosopher Harvey Mansfield’s observation that “environmentalism is school prayer for liberals.” Professor Mansfield delivered that mot some twenty years ago. It seemed almost quaint at the time. It was, we thought, a comparison that had the advantage of being both true (environmentalism really did seem like a religion for certain leftists) and amusing (how deliciously wicked to put a bunch of white, elite, college-educated leftists under the same rhetorical light as the Bible-thumpers they abominated). Ha, ha.

Well, we aren’t laughing now. In the intervening years, the eco-nuts went from being a lunatic fringe to being lunatics at the center of power. Forget about Al Gore (if only we could): sure, he was vice president, but that was in another country (or so it seems) and besides . . . our readers will catch the allusion to Marlowe via T. S. Eliot. Despite his former proximity to the seat of power, Al Gore is relevant these days partly as comic relief, partly as an object lesson in the cynical manipulation of public credulity for the sake of personal enrichment. Has anyone totted up how many tens of millions Gore has raked in through his proselytization of the Gospel of Green? The current issue of The Atlantic suggests the number is in the hundreds of millions. The collections come early and often in the Church of Gore. Who knew that pseudo-science, wrapped in the mantle of anti-capitalist moral self-regard, could pay so well?

But we digress. The issue is not Al Gore but the institutionalization of a radical, anti-growth ideology at the center of American political power, abetted by yes-men in the media and the academy. They parrot the party line in exchange for a chance to bathe in the warm effluvium of self-congratulation followed by a brisk turn on the soap box of moral denunciation. We thought about this unedifying spectacle the other day when we chanced upon “Environmental Activists Turn Up the Rhetorical Heat,” an essay by Joel Kotkin that appeared last month in The Orange County Register. “The green movement’s real agenda,” Kotkin points out, “is far more radical than generally presumed.” And what is the green movement’s “real agenda”? It involves, as part of its emotional fuel, what the former Sierra Club President Adam Werbach called “misanthropic nostalgia,” a “deeply felt ambivalence,” to quote another eco-crusader, “toward the human race and our presence here on planet Earth.”

Returning to some pre-civilizational state in which the world was not cluttered up with humans building things might be the long term goal of enviro-loons like McKibben. For the immediate future, plunging the Third World deeper into poverty while shackling the engines of economic prosperity in Europe and America is enough to be getting on with. In a way, this is old news. Consider, to take one prominent example, Paul Ehrlich’s neo-Malthusian jeremiad The Population Bomb. Published in that annus horribilis 1968, it is a fittingly fatuous contribution to that most fatuous of years. “In the 1970s and 1980s,” Ehrlich wrote, “hundreds of millions of people will starve to death in spite of any crash programs embarked upon now. . . . We are today involved in the events leading to famine and ecocatastrophe.” Of the world’s poor, he skirls, “a minimum”(Ehrlich’s emphasis) of ten million, mostly children, will starve to death every year in the 1970s. And that’s just for starters. Those tens of millions are but “a handful” of the hundreds of millions slated for starvation because (as per Little Father Time in Jude the Obscure) “we are too menny.”

Back in the 1970s, Paul Ehrlich was warning about the coming ice age. That was before the hysteria formerly known as “global warming” (now called “climate change,” since the globe hasn’t been cooperating on the warming front for more than fifteen years). But there are two things to note about the modus operandi of Ehr-lich and his like-minded extremists. 1) Whatever their campaign du jour—overpopulation, global warming, global cooling—it’s always too late. “Nothing can prevent a substantial increase in the world death rate,” Ehrlich intones at the beginning of The Population Bomb. Should we all just pack up and go home then? All is lost. The sky is falling. Mass starvation is imminent and unavoidable. Nothing can prevent it. Nevertheless, you don’t want to let a good crisis go to waste. Although nothing can be done, we need to “take immediate action at home and promote immediate action worldwide.” What sort of action? “Population control,” for starters, and this brings us to: 2) No matter what the crisis, massive government intervention is always the answer. Ehrlich (albeit with shaky grammar) would have us denude the planet of humans “hopefully through changes in our value system, but by compulsion if voluntary methods fail” (our emphasis).

“By compulsion”: there in a single phrase you have the secret to the appeal of climate hysteria to the Left. Where’s Robespierre when you need him? The world is ending, Comrade, and although there is nothing you can do about it, a whole alphabet soup of government agencies is here to tell you what you may and may not do when it comes to what sort of car you drive, how you heat your house, where your electricity comes from, what you may eat or drink, and on and on and on. Al Gore is just a cynical mountebank, Paul Ehrlich and Bill McKibben are just crackpot writers. Have you heard about John Holdren? Allow us to introduce you to President Obama’s top science adviser. Holdren is Assistant to the President for Science and Technology, Director of the White House Office of Science and Technology Policy, and Co-Chair of the President’s Council of Advisors on Science and Technology. He is also an acolyte of Paul Ehrlich and the co-author, with Paul and Ann Ehrlich, of Ecoscience: Population, Resources, Environment, another doomsday scenario in which the specter of overpopulation and putative exhaustion of the world’s resources is paraded in a cornucopia of imminent apocalyptic fantasy.

Never mind that the world’s chief population problem these days is collapsing birth rates throughout the industrialized world. In another thirty or forty years, there might still be a country called Italy, for example, but precious few Italians. But according to Holdren and the Ehrlichs “compulsory population-control laws, even including laws requiring compulsory abortion” might be just around the corner. Such interventions, they speculate, “could be sustained under the existing Constitution if the population crisis became sufficiently severe to endanger the society.” But never fear! “If effective action,” such as voluntary sterilization, “is taken promptly against population growth, perhaps the need for the more extreme involuntary or repressive measures can be averted in most countries” (our emphasis).

For the Ehrlichs and President Obama’s chief science advisor, though, the need for such “coercive control” is far from unimaginable. (Indeed, they note that “the potential effectiveness of those least acceptable measures may be great.”) They dream about “an armed international organization, a global analogue of a police force” to provide security, and they cheerfully note that “the first step” on the road to this utopia “necessarily involves partial surrender of sovereignty to an international organization.” Other steps include “A massive campaign . . . to restore a high-quality environment in North America and to de-develop the United States.” “De-develop”? Yes, that’s right. The authors note sadly that the idea of “de-development,” like the idea of mandatory sterilization, has met with “considerable misunderstanding and resistance.” They are not, they explain, anti-technology. They just want to put an end to technology they don’t like—“giant automobiles,” for example, or “plastic wrappings” or “disposable packages and containers.” Their list is long and various. “Environmentalism is school prayer for liberals.” The pulpit is now in the White House, and the sermons—and the enforcements—are being designed by people like John Holdren. It’s enough to make one indulge in a bit of selective misanthropic nostalgia.