A tale of two Popes 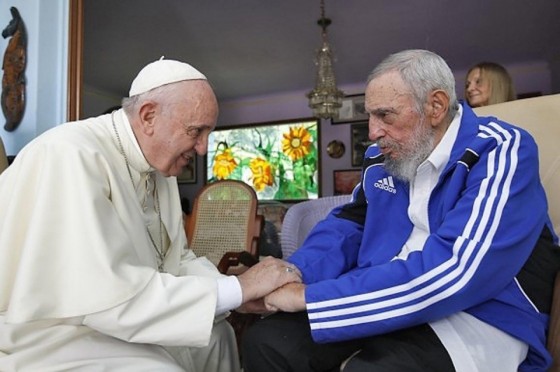 As we write, Pope Francis, still in the midst of his chummy visit with the Communist dictator Raúl Castro, is about to descend on New York City, a visit that will produce (in the words of The Washington Post) “one of the largest security operations in U.S. history.” It is useful, on the eve of this historic visit, to contrast the activities of Pope Francis with those of his predecessor, Pope John Paul II. Pope Francis, in addition to pronouncing anathema upon air-conditioning and other evidences of the Devil’s handiwork, gladly says a Mass in Havana to which critics of the Communist regime are barred by the authorities. As the London Telegraph reported, “Cuban security officers detained at least three people who appeared to be trying to distribute leaflets in the capital’s Revolution Square . . . . The three people were tackled and dragged away by the officers.” After the Mass, Francis met Fidel Castro. “The pair held a ‘friendly and informal conversation’ for around 40 minutes,” according to a Vatican spokesman. The occasion was commemorated in a photograph by Alex Castro, Fidel’s son, which “showed the 89-year-old former president and Francis looking into each other’s eyes as they shook hands.”

Touching. But quite different from John Paul’s visit to Poland in 1979, when the Pope met with dissidents of the regime, not those in charge of it, and helped spark the Solidarity movement that assisted in bringing about the downfall of Communist tyranny in Eastern Europe and the Soviet Union. As far as we know, there were no photographs of John Paul and the Polish strongman Wojciech Jaruzelski gazing into each other’s eyes. Under Francis, as The Guardian recently reported, the Catholic Church “warms to liberation theology as founder heads to Vatican.” But the former Karol Wojtyla, as John O’Sullivan notes in his book The President, the Pope, and the Prime Minister, “was never tempted by such ideas, for the good reason that he was actually living in an oppressive totalitarian society.”

Pope Francis, in his Peronist hostility to capitalism, pretends to be siding with the poor and disenfranchised. In fact, as George Will wrote in his syndicated column last month, from economics to the environment Francis “embraces ideas impeccably fashionable, demonstrably false, and deeply reactionary. They would devastate the poor on whose behalf he purports to speak.” Since Francis has emerged as the Green Pope par excellence, it is worth recalling some of the data points Will marshals:

Francis deplores “compulsive consumerism,” a sin to which the 1.3 billion persons without even electricity can only aspire. He leaves the Vatican to jet around praising subsistence farming, a romance best enjoyed from 30,000 feet above the realities that such farmers yearn to escape. . . .

Our flourishing requires affordable, abundant energy for the production of everything from food to pharmaceuticals. Poverty has probably decreased more in the past two centuries than in the preceding three millennia because of industrialization powered by fossil fuels. Only economic growth has ever produced broad amelioration of poverty, and since growth began in the late 18th century, it has depended on such fuels.

Matt Ridley, author of “The Rational Optimist,” notes that coal supplanting wood fuel reversed deforestation, and that “fertilizer manufactured with gas halved the amount of land needed to produce a given amount of food.” The capitalist commerce that Francis disdains is the reason the portion of the planet’s population living in “absolute poverty” ($1.25 a day) declined from 53 percent to 17 percent in three decades after 1981. Even in low-income countries, writes economist Indur Goklany, life expectancy increased from between 25 to 30 years in 1900 to 62 years today. 63 percent of fibers are synthetic and derived from fossil fuels; of the rest, 79 percent come from cotton, which requires synthetic fertilizers and pesticides.

And so on. Again, how different was Francis’s predecessor. In 1991, John Paul released his encyclical Centesimus Annus which was in part a thoughtful criticism of socialism, partly a defense of capitalism “rightly understood,” as the theologian Michael Novak put it with Tocquevillean eloquence. “Man fulfills himself,” John Paul writes, “by using his intelligence and freedom. In so doing he utilizes the things of this world as objects and instruments and makes them his own. The foundation of the right to private initiative and ownership is to be found in this activity.” The better-off have an obligation to aid the needy, but John Paul had the wit to see that one could best aid them by giving them the tools to help themselves, not by pursuing a social policy that preferred the immiseration of all to the conspicuous flourishing of some whose success would benefit if not render equal the less fortunate.

Popes are in the business of directing us beyond mere material success to higher things. Well and good. But it is part of the genius of Christianity that its spirituality is incarnate: it is a worldly as well as an other-worldly religion. “God made the world and saw that it was good”: that bulletin from Genesisreverberates through much of the orthodox tradition of the Church, notwithstanding certain apophatic byways. Do you want to help the poor? Then you should avail yourself of the most powerful engine for the production of wealth that the world has ever seen: democratic capitalism. Those who, like Francis, would have us turn our backs on the achievements of capitalism are unwittingly encouraging us to turn our backs on the poor. Would you advocate wind power over the use of fossil fuels? Then you are consigning untold thousands to penury and early death. There are some, like Francis and his spiritual brother-in-arms Barack Obama, who seem to believe that economics is fundamentally about the redistribution of wealth. John Paul saw further, looked deeper, and understood that the secret is distribution, not redistribution, and that the prerequisite of effective distribution is the untrammeled production of wealth, not its control by a central, and inevitably sclerotic, government bureaucracy.

II Inhuman power of the lie: “The Great Terror” at 40 by Michael Weiss

A tale of two Popes