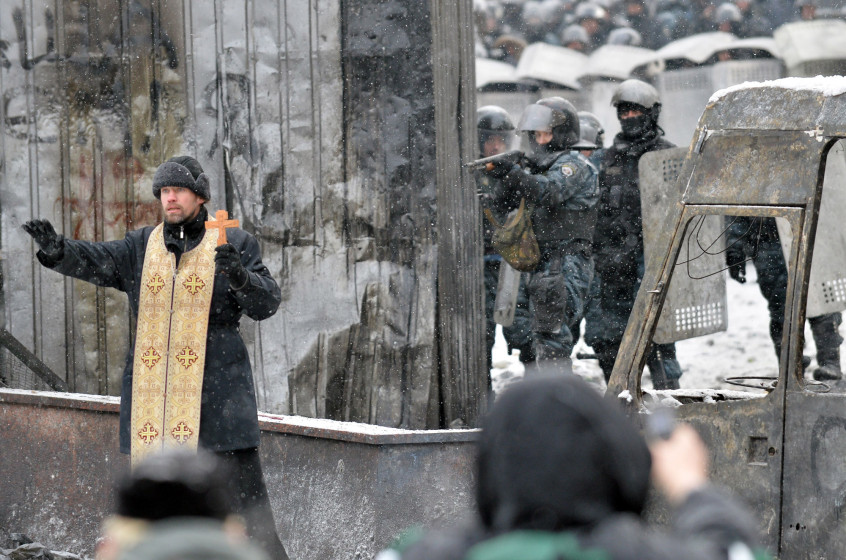 Some wars you can see coming: Germany gobbles up Austria and large parts of Czechoslovakia; it militarizes the Rhineland and trespasses upon every agreement it had made regarding the size and appointment of its armed forces. Winston Churchill saw it coming as early as 1935, long before the Anschluss. In “Hitler and His Choice,” Churchill acknowledged that the new German leader had recently “offered many words of reassurance, eagerly lapped up by those who have been so tragically wrong about Germany in the past. Only time can show, but, meanwhile, the great wheels revolve; the rifles, the cannon, the tanks, the shot and shell, the air-bombs, the poison-gas cylinders, the aeroplanes, the submarines, and now the beginnings of a fleet flow in ever-broadening streams from the already largely war-mobilized arsenals and factories of Germany.”

Thus concludeth his essay. It was possible, Churchill acknowledged at the beginning of the essay, that Hitler might turn out to be one of those leaders who storm to power employing “stern, grim, and even frightful methods,” but whose lives, taken all in all, “have enriched the story of mankind.” He didn’t believe it for a minute, but he acknowledged the possibility. (What frothy semantic stuff is possibility: Tell the troops that something they wish for is possible and they’ll tincture hope with a garland of belief; tell them something they don’t want is probable but not certain and they’ll invest “might not” with strains of “it won’t.”)

You didn’t have to be Churchill to see World War II coming. But other conflagrations did not arrive with such early warning apparatus. The impending centenary of the Great War has the commentariat weighing in about the surprising advent of that world-changing paroxysm. And there are plenty of other examples. We have had occasion to meditate about the Crimean War (1853–56) recently. For many, we suspect, that conflict hardly exists except as the occasion for “The Charge of the Light Brigade” and “The Lady with the Lamp.” But in fact it was an enormously bloody conflict—it left about half a million dead. But who could see it coming? As one historian noted, the war

was not the result of a calculated plan, nor even of hasty last-minute decisions made under stress. It was the consequence of more than two years of fatal blundering in slow-motion by inept statesmen who had months to reflect upon the actions they took. It arose from [Napoleon III’s] search for prestige; Nicholas’s quest for control over the Straits; his naïve miscalculation of the probable reactions of the European powers; the failure of those powers to make their positions clear; and the pressure of public opinion in Britain and Constantinople at crucial moments.

It is the regular occurrence in history of such “crucial moments,” the predictable advent of the unpredictable, the probability of “inept statesmen,” of blundering and miscalculation that turns out to be “fatal” as well as naïve that makes one give, when contemplating the annals of silly prognostications, such high honors to this pronunciamento by Francis Fukuyama in 1989: “What we are witnessing is not just the end of the Cold War, or a passing of a particular period of postwar history, but the end of history as such: that is, the end point of mankind’s ideological evolution and the universalization of Western liberal democracy as the final form of human government.”

So here we are, nearly twenty-five years on, and how do things look? Let’s leave what’s happening in the Middle East—where history certainly seems to be stirring—and in China (ditto) to one side. Since we have just touched upon Crimea, there at the tip of the Ukrainian peninsula, how about Ukraine? After the Soviet Union broke up, it seemed for a time that Ukraine was drifting towards the West. This past autumn, a sort of consummation had been planned when a long-gestating “Association Agreement” with the European Union was to be signed. All concerned saw the agreement as another stage on the way to Ukraine’s filiation with, and possibly—who could say?—membership in the E.U. But Viktor Yanukovych, Ukraine’s thuggish President since 2010, bowed to pressure from his neighbor to the north and decided not to sign it, much to the consternation of the citizens of Ukraine, who took to the streets en masse—some estimates put the number in the hundreds of thousands—to protest the slippage of the country into the orbit of Putin’s Russia. The situation does not seem to be improving. Last month, as the Kharkiv Human Rights Protection Group reported with an adept use of editorial quotation marks, the country’s ruling majority “passed” a draft law that criminalizes many forms of free speech and peaceable dissent. Hannah Thoburn, writing for The American Interest, summarizes some of the new proscriptions:

The list of new crimes enumerated in the documents that some Ukrainians are calling “The Law on Dictatorship” is long and targets all segments of Ukraine’s protesting population. For example, participants in the collective driving protest movement “AutoMaidan” now face a two-year suspension of their licenses and confiscation of their vehicles for driving a car that “moves in a column of more than five.” The new laws also take a page from recent Putin initiatives and target civil society organizations. Now NGOs that receive foreign funding must register as “foreign agents” within three months or be dissolved. They will also have to pay an 18 percent income tax and submit to a strict reporting regime. Those that are branded as “extremist” will be closed. Defamation has been re-criminalized and “extremist activity”—which is poorly and broadly defined—can be punished by large fines and up to three years in prison. Online media outlets that have flourished throughout the protests will now have to contend with requirements to register themselves as “information agencies” and a very real possibility that the state will order internet providers to block their websites.

This is depressing news for Ukraine, of course. And it’s not just the spate of new penalties. In response to increasingly violent protests, the police are deliberately aiming their rubber bullets at protesters’ faces, and have reportedly blinded several. They have also taken to yanking injured protesters out of ambulances or hospital beds to arrest and detain them. Yanukovych’s Ukraine is a society on the brink of something—civil war, perhaps, a post-democratic totalitarianism, maybe, but certainly not “the universalization of Western liberal democracy as the final form of human government.”

But it would be naïve to believe that the intolerance of dissent, the eclipse, in fact, of the spirit of “Western liberal democracy,” is confined to this Eastern European country poised precariously between East and West.