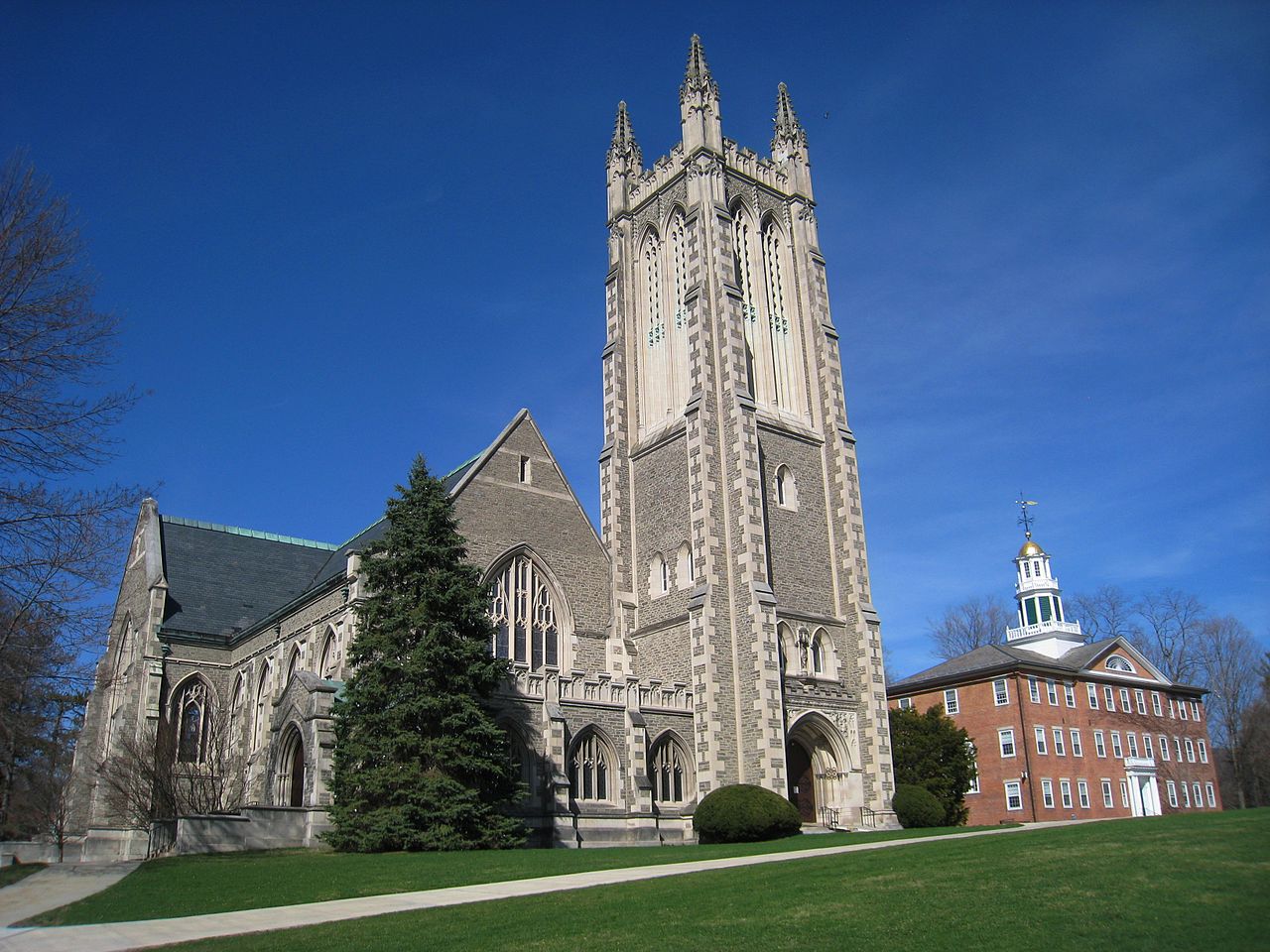 Last month in this space, we paid a visit to Bowdoin College, courtesy of What Does Bowdoin Teach? How a Contemporary Liberal Arts College Shapes Students, a long and devastating examination of the college published by the National Association of Scholars earlier this spring. “Varieties of Closed-Mindedness.” “Queer Outrage.” “Climate Days and True Believers.” Those and kindred chapter heads epitomize the existential weather at Bowdoin: lots of talk about “diversity” but in fact strict conformity to the whole rancid agenda of political correctness with its intolerance, florid public obsession about sex, and pagan worship at the altar of environmentalism. (“Environmentalism,” the philosopher Harvey Mansfield once observed, “is school prayer for liberals.”)

As we noted last month, the real importance of What Does Bowdoin Teach? goes far beyond the privileged confines of that elite, beta-plus liberal arts institution with its 1,200 students, silly president, and nearly $1 billion endowment. What the NAS has given us with its peek into the dismal, expensive swamp that is Bowdoin is a glimpse into the heart of American higher education writ large. And that diseased organ, in turn, is symptomatic of pathologies in the body politic as a whole.

Look almost anywhere in academia: What Harold Rosenberg called “the herd of independent minds” has huddled together in bovine complacency, mooing ankle-deep in its own effluvia, safe within its gated enclosure. Consider, to take just one example, Williams College, another beta-plus (or possibly even alpha-minus) liberal arts institution: rich, bucolic, self-satisfied, pathological. A year or so back, a racist graffito was discovered on the wall of a student dormitory during homecoming weekend. Result? Instant lockdown of the campus as the president of the college denounced the “horrifying,” “vile act” and enlisted not just the campus security and the local police but the FBI in the search for the perpetrator of this “hate crime.” The culprit was never discovered, or at least his (or her) identity was never made public. We are not surprised. As we speculated in this space at the time, the offending graffito was probably not scrawled by racists lurking about the ivied purlieus of Williams. Can there be a more racially sensitive environment than an elite liberal arts college? More likely, we suspect, is the rumor we heard that the secret culprit was a member of the minority community whose special perquisites depend heavily on a steady diet of racialist provocation.

Don’t get us wrong. We do not condone defacing private property. But the hysteria over the mysterious graffito was not only disproportionate, it was also a textbook illustration of political correctness run amok.

Sometimes what happens at places like Williams is merely farcical. Several months ago, a friend who teaches a Williams sent us a memo circulated by a diligent colleague:

Dear Studio Faculty,
Security came to my office this morning and said that they found a bucket with what appears to be medical waste in it in Driscoll Dining Hall. They thought it might be an art project. It has been turned over to Health Services for testing to see if it’s real.
Does anyone know of any such art project?

Overly cautious? In the age of charlatans like Damien Hirst, Jenny Holzer, the Chapman Brothers, and many other practitioners of mind-numbing psycho-pathology, who can say whether a bucket of medical waste is or is not an art project? If Tracey Emin can win the Turner Prize for My Bed—“her own bed, in all its embarrassing glory. Empty booze bottles, fag butts, stained sheets, worn panties: the bloody aftermath of a nervous breakdown”—why couldn’t a bucket of medical waste be an art project at the “art” department of an over-priced private college in Massachusetts? Maybe the bucket was the product of a performance by Millie Brown, a “vomit artist” who drinks dyed milk which she then regurgitates over a canvas (or, more recently, over the pop singer Lady Gaga in a music video)? Who knows? Certainly, the author of that memo was exercising rational caution. Otherwise, she might have wound up like the janitor at a Cork Street gallery in London who, tidying up after an opening party for Damien Hirst’s latest exhibit, cleared away a tray full of soiled coffee cups, overflowing ashtrays, and the like.

Bad move. The tray was not just a tray full of trash. It was a tray full of trash artfully arranged by Damien Hirst, worth, according to the distraught gallery director, more than £100,000. (But be of good cheer: the garbage in question could be “recreated.”)

Such stories—and they are legion—might make it seem that what is happening in the cultural-academic complex is mostly comic: repellent, no doubt, but somehow more silly than minatory.

The problem is that they are part and parcel of a concerted assault on the fundamental civilizational values of our culture. By some strange process of moral entropy, those institutions which had been the bearers and preservers of our cultural inheritance have mutated into its deadly enemies. It was Williams College, once again, that prompts this melancholy thought. Just last month, the college sponsored “Worlds of Wonder: The Queerness of Childhood,” an “interdisciplinary workshop” that basked in the imprimatur of a dozen college entities from the Dean’s office to the “Committee for Human Sexuality and Diversity” and the “Queer Student Union.” Among the festivities were “Lessons in Drag,” a performance piece, and papers on such pressing subjects as “Queering America’s Progress Narrative: The California Ruins of Leland Stanford Jr.,” “What Does it Mean to Be an Adult if We Queer the Child? Laws of Consent in Comparative Perspective,” and “Sex Panics, Child Prostitutes, and Global Sporting Events, or: How to Save a Sexually Precocious Child and Get a Luxury Hotel for Free.”

We have had occasion before to quote Kingsley Amis’s wise observation that much of what is wrong with our culture can be summed up in the word “workshop.” But even a satirist of Amis’s asperity, we suspect, would have been at a loss when confronted with “The Queerness of Childhood.” “This workshop,” the program reads, “brings together a group of scholars and clinicians working at the intersections of childhood studies, psychoanalysis, psychology, pedagogy, and queer theory in order to have a conversation about queer children and the queerness of childhood.” Really?

It seeks to investigate the child as a critical tool, a political trope, an affective field, a site of cultural production and consumption, a psychoanalytic subject, and a living, breathing, historical personage to whom we are ethically beholden: a figure for both queer political possibility (Jack Halberstam) and political or symbolic death (Edelman). Participants were asked to explore questions such as: Who is the queer child and why does it continue to command the attention of queer theorists and psychoanalysts? What is queer about childhood? . . . What does the concept of the queer child do to notions of childhood? What does it mean for the queer to “fuck the figural Child” (Edelman) when the gay child is already fucked, in suicidal crisis? How can we attend to the sideways growth of all children?

It costs $59,712 per year to attend Williams. For what? Politically correct hysteria, buckets of medical waste that are mistaken as art works, and conferences like “The Queerness of Childhood.” Over the last couple of years, there’s been a lot of talk about “the higher education bubble.” What can’t go on forever, the economist Herb Stein once observed, won’t. The gassy, mephitic, overinflated travesty that is the higher education establishment cannot go on forever. Therefore it won’t. A collateral benefit will be the eclipse of these exercises in pathology masquerading as scholarship. It’s not just Williams, or Bowdoin. The disease is endemic. That is the problem. But it is also the reason it won’t prevail.

II Inhuman power of the lie: “The Great Terror” at 40 by Michael Weiss