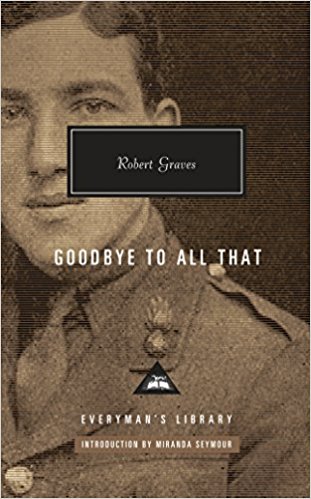 Goodbye to All That, by Robert Graves (Everyman’s Library):The poet does not always get to determine his path to immortality. One hundred years after the end of World War I, and ninety years after its publication, the poet Robert Graves’s war memoir remains a classic. The first edition of Goodbye to All That appeared in 1929, early in Graves’s writing career, following a tour of service as a British officer that left him physically and mentally devastated. After he revised the book in 1957, his memoir earned its reputation as an exemplar of World War I literature both for its unflinching account of the horrors of the conflict and for the rebellious, incisive spirit with which the embattled lieutenant portrayed the war. Graves continued to write prose throughout his life, but his lasting passion was for poetry (he produced fixty-six volumes, as Robert Richman notes in a New Criterion essay on Graves). Though Graves sought solace in his mythologically focused poetry, it is no accident that his most enduring work is rooted in reality: The Everyman’s Library centennial edition of Goodbye to All That is worth a read as a chronicle of World War I and its enduring effects on those who were forced to reckon with it. —HN

“Peter Reginato: Day to Night” at Westbeth Gallery (through July 1):Peter Reginato is known for metal sculptures informed by the custom-car culture of his native California. The secret ingredient of his work is speed—colorful metallic musculature illuminated in an acetylene glow. Two years ago, in a breakout exhibition at Adelson Galleries, Reginato showed how these polychrome forms translate to two dimensions, with paintings on canvas that were dazzling, daring, and fun. Now the latest of these abstractions are on view in “Day to Night,” a solo show at Westbeth Gallery, on view through July 1. —JP

Miles Malleson’s Conflict,at the Beckett Theatre at Theatre Row, produced by the Mint Theater Company (through July 21): Led by its director Jonathan Bank, The Mint Theater Company, a formidable group devoted to resurrecting neglected plays from the “dramaturgical dustbin,” has developed a solid reputation for making the old feel new. Known especially for its Anglophilic, pre-war bent, the company has presented American premieres of a number of important plays. One such production currently running at the Beckett Theatre on West Forty-second Street is Miles Malleson’s 1925 Conflict, a political drama/romance set in Roaring Twenties London. The plot revolves around one Lady Dare Bellingdon and two men (former school buddies, now opposing candidates for Parliament) who seek her heart. That era’s frenzied and fanatical political climate is Malleson’s ultimate subject and reminds us that “plus ça change, plus c’est la même chose,” but his clean, sparse writing and frank representations of character rescue the work from the cliche that is ruinous to so much political art. —AS

Forum on Canova and the Presidential Image at the Frick Collection (June 27): The Frick’s new exhibition of Canova’s monumental sculpture of George Washington is a timely one, given the recent quibbling over the commemoration of the American past. To mark the exhibition, the museum is presenting a lecture series examining various aspects of artistic commemoration. First up, this Wednesday, is Kenneth S. Lapatin, the Associate Curator of Antiquities at the Getty Museum in Los Angeles, who will bring useful historical perspective to what has become a very contemporary concern. And be sure to look out for Mario Naves’s review of the exhibition, forthcoming on our website later this summer. —BR

From the archive:“Cider 5¢ a glass,” by Donald Hall (February 1988). A poem by the late poet laureate of the United States and frequent contributor to The New Criterion, who died this week.

From the current issue:“They built the wall,” by Nigel Spivey. A review of Hadrian’s Wall by Adrian Goldsworthy.