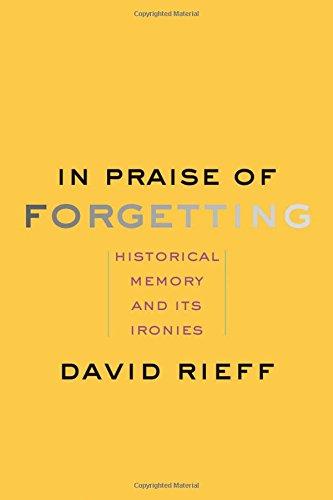 Your blogospondent has been reading with great interest David Rieff’s new book,  In Praise of Forgetting: Historical Memory and Its Ironies—partly in order to determine whether or not it has been inspired by the new vogue among the militantly politically correct for forgetting the past—or, more accurately, misremembering it. I haven’t yet discovered the answer to my question, but I don’t quite like the sound of one of Mr. Rieff’s answers to a question by Rebecca Onion, who interviewed him for Slate about the book. She asks him what he thinks of efforts to remove the statue of Cecil Rhodes from Oriel College, Oxford or the name of Woodrow Wilson from the School of Public and International Affairs at Princeton. Here’s what he replies:

I think it depends on the case. I think Woodrow Wilson was a truly terrible man and a truly terrible president. I’m not a fan of pretty much anything he did. I do think that there are cases where it seems to me it’s not a bad thing to change the names. My own view, which is maybe part of my own kind of caution, is that this should be exceptional. That it really should be the case of a figure who really did commit terrible crimes. I was for the effort to force the removal of the statue of Cecil Rhodes [at Oxford]. I thought in a multiracial society having a statue to a great racist imperial figure . . . that seemed to me a perfectly reasonable change to make.

Ah, but the problem here is not that Rhodes and Wilson are being remembered when they should be forgotten, but that they are being remembered one way instead of another. Those who advocate the cancellation of their commemorations at institutions now controlled by people more like themselves than Rhodes or Wilson or their contemporaries do not advocate forgetting them. On the contrary! Rhodes, to take Mr. Rieff’s example, is to be remembered as “a great racist imperial figure”—which is to say, a bogyman, never to be forgotten by the PC crowd, lest others of his nefarious kind (and of course we are to suppose them all around us) should creep back into power some day.

In other words, the iconoclasts are the real memorial party here. They are like the anonymous Serb mentioned earlier in the interview who once handed Mr. Rieff a scrap of paper with nothing but “1453” scribbled on it—presumably to explain the Serbs’ undying hatred for the Ottoman Turks who had conquered the Byzantine empire on that unforgotten date. He has not quite figured out that the logic of his point of view is that if the choice between remembering and forgetting should be made on the basis of which is more conducive to peace and social harmony, then you will always choose to forget the bad and remember the good. But what is good and what is bad will always depend on whose side you’re on, so his prescription cannot be a very helpful one. The problem is not the failure to forget but the failure to forgive.

Forgetting can be as much a matter of what he calls myth-making as remembering can. Take that formulation about Rhodes, that he was “a great racist imperial figure.” That’s an example of our remembering something about him that he didn’t know about himself. Isn’t that just forgetting dressed up as remembering? The meanings of “racism” and “imperialism” have been formed for us by people who lived after his time, and with a view precisely to discrediting him and others like him in the past who were all but universally regarded as great men in their own time. It is naïve of Mr. Rieff to suppose that such complicated moral questions can be determined by distinguishing history from myth-making. All history tends to myth-making of one sort or another, and that of the iconoclasts is at least as blatant as that of Rhodes and his admirers, who in their view are the sort of mythical villains that the Turks were, and are, to the Serbs.

James Bowman is a Resident Scholar at the Ethics and Public Policy Center and the author of Honor, A History (Encounter).