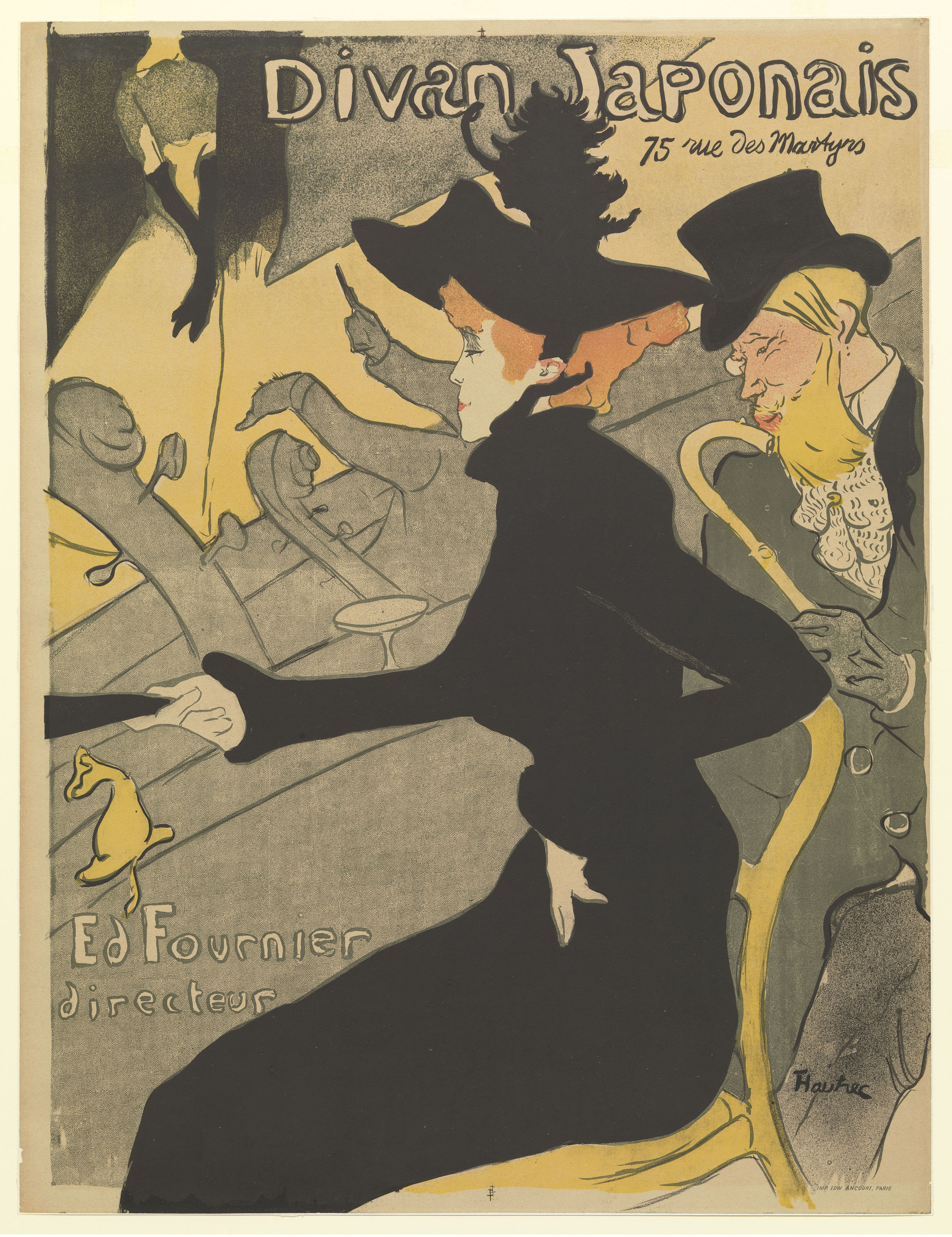 Thirty years feels like the right amount of time to wait for a reappraisal; any longer would be risky. Toulouse-Lautrec needs defending as probably no other canonized artist of modern times does. His work has been so shamelessly vulgarized, imitations of his prints so often hung on the bathroom walls of overpriced French restaurants, that one is predisposed to look askance at his work and his reputation.

MOMA revises this unfair perception with “Prints and Posters,” which includes both lighthearted and serious works. The exhibition, which runs until March of next year, focuses on lithography to the exclusion of almost every other medium. At first this curatorial choice might seem narrow-minded, but it makes perfect sense in the case of Toulouse-Lautrec, whose best work was often in the form of printed posters, ads, and illustrations.

The form suited Toulouse-Lautrec. It was as malleable as he was. Born into an aristocratic family, he spent his days and nights among the masses in the Montmartre neighborhood of Paris, but returned home every evening to have dinner with his pious mother. Bandy-legged and bespectacled, he cut a strange figure among his own class but found himself accepted into the world of freaks, barflies, and prostitutes that surrounded him in Paris.

Paris, like printing, suited Toulouse-Lautrec’s protean nature. The city presented him with many and varied scenes and settings, of which we see a wide sampling in “Prints and Posters.” The delirious energy of posters like La Troupe de Mademoiselle Eglantine is mellowed by the presence of meditative works like the “Elles” lithographs.  Toulouse-Lautrec produced the “Elles” series, depicting eleven of Paris’s best known prostitutes, for a book about brothel life; however, the book flopped—apparently his portrayals of prostitutes did not sufficiently titillate the French reading public. The pictures remain, and give us proof of Toulouse-Lautrec’s range. They are among his finest works, and betray the strong influence of Degas—the shabbily wallpapered apartments, the yawning laundresses, the women bent double. Toulouse-Lautrec creates powerful images of femininity unlaced, unpowdered, and unadorned. 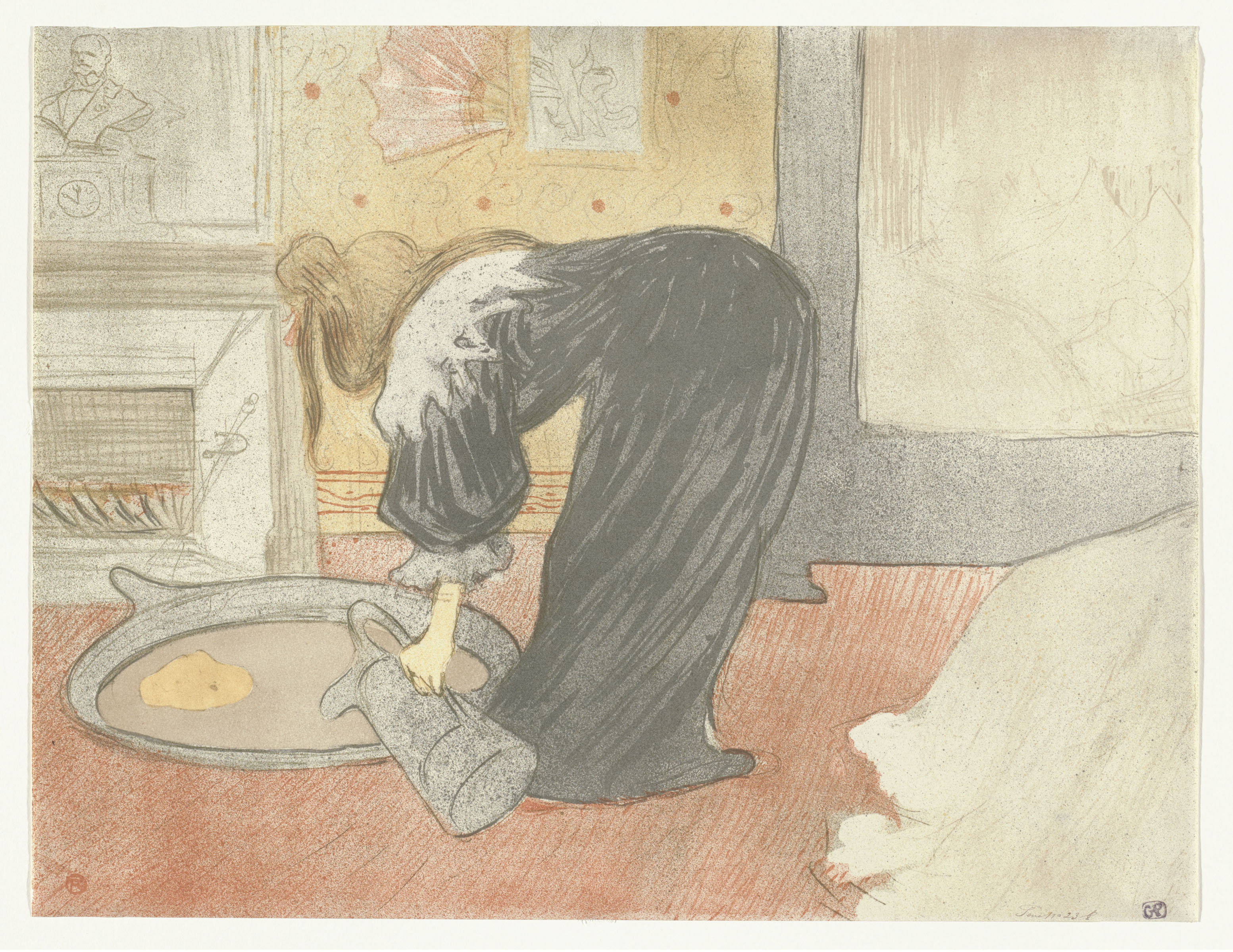 The exhibition itself embodies Toulouse-Lautrec’s spirit of eclecticism. A touchscreen tablet allows the viewer to scroll through a book of illustrations, while speakers on either side pour out the chirping voice of Yvette Guilbert, a cabaret singer and a favorite subject of Toulouse-Lautrec. The same cabaret song repeats on loop. (A little variation or total cessation of the music surely would have enhanced the effect.) An old film by the Lumière brothers, those forefathers of filmmaking, shows a danse serpentine: a whirling-dervish sort of dance where women in dresses twirl huge bolts of silk on bamboo poles. A few photographs give us a nostalgic peep into fin-de-siècle Montmartre, a place today so flooded with tourists that it is hard to imagine what it was like during its heady youth.

All this extra material seems a little excessive, but then again, so is Toulouse-Lautrec. He revels in the cheap, relishes in baubles and bawdiness. As reported in an old MOMA catalogue, contemporaries describe Toulouse-Lautrec’s work as “exquisitely perverse” and “superbly nauseating.” “Prints and Posters” shows that he is sometimes simply “exquisite” and “superb.”

“The Paris of Toulouse-Lautrec: Prints and Posters” opened at the Museum of Modern Art, New York, on July 26, 2014 and remains on view through March 22, 2015

Andrew Koenig is an occasional contributor to The New Criterion. He holds a B. A. in English from Yale.